The Miracle Of Colors

Why is it that we see an apple red, a tree green, a flower pink, the sky blue, the land brown, the clouds and the snow white, and the rainbow colorful?

Color is nothing but a property related to humans derived from the spectrum of light's interaction with the light receptors in our eye. It is the light in the "visible region" of the electromagnetic spectrum that our eyes can detect or see, as can be known by its name, (wavelength: 380-750nm). This light of the visible region, is also called as the white light, this is composed of seven different colors, violet, indigo, blue, green, yellow, orange and red. An object depicts a certain color based on the color of the light leaving its surface. This color depends on the incident light and reflecting property of the object. Some objects not only reflect but transmit light as well which can also account for its color. 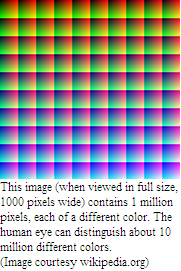 How does our eye perceive this color? In the retina of the eye there are photoreceptor cells called rods and cones. The rods are responsible for night vision and general shape of objects. But the ability of the human eye to detect and distinguish colors is due to the color receptor cells in the eye called cones. These are called as L, M and S cones or blue, red and green cones.

The light reaching the eye, is reduced to three color components by the eye. The three type of receptor cells or cones produce three different signals based on the extent to which each of them is stimulated. The resultant signal is sent to the brain, where these signals are received and processed, at the end of which it shows us the color of the object, this is how we see an object as colored. All this in a matter of fractions of a second.

Amazing is it not?

Could all this have been just a chance occurrence? Just in one small part of our body, the eye, there are so many mechanisms, just imagine all the mechanisms that could be there in the whole of our body! All the programming that's gone into the making of this property called color, then the perception of this color by the eye, all this could truly be the result of extreme brilliance. Does this not then, direct us to the programmer behind all this programming?

Allah says in the Holy Quran:

"Did you not see how God sent down water from the sky with which We bring forth fruits of diverse colors. In the mountains there are streaks of various shades of white and red, and jet black rocks; in like manner, men, beasts, and cattle have their diverse hues too. Only those of His servants, who possess knowledge, fear God. God is almighty and most forgiving." (Holy Quran 35:27-28).

We visit an art exhibition, see the numerous paintings on display, and express our wonder at the artistic brilliance of the artist. We praise his selection and depiction of the colors on the canvas. Then why do we not praise our creator each time we open our eyes to this colorful world around us? Is His artistry not greater, more colorful and more beautiful than anyone else's?

Allah says in the Holy Quran:

"He is Allah, the Creator, the Evolver, the Bestower of Forms (or Colors). To Him belong the Most Beautiful Names: whatever is in the heavens and on earth, does declare His Praises and Glory: and He is the Exalted in Might, the Wise." (Holy Quran 59:24).

And nothing is the life of this world but a play and a passing delight; and the life in the hereafter is by far the better for all who are conscious of God. Will you not, then, use your reason?
(Holy Quran 6:32)

The prophet (peace be upon him) has said,"None of you will have faith till he wishes for his brother what he likes for himself."Narrated by Anas(RA)(Bukhari)

Young Muslim Digest It truly is a very authentic islamic monthly. Its a great digest, you can browse the current and past issues online or get a hard copy for yourself.